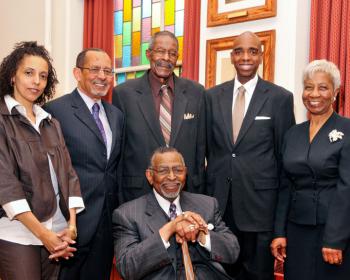 Ms. Fishman is a retiree of the school District of Philadelphia.  She also worked for school districts in New Jersey and the Upper Merion School District. During her years as an educator, she served in the capacity of teacher, supervisor, principal and project evaluator. A graduate of Temple University, Ms. Fishman currently works as an educational consultant, specializing in special education.

Mr. Jones is a graduate of Morehouse College in Atlanta, GA and Arcadia University in Glenside, PA. He is a former School District of Philadelphia teacher and SLC Coordinator.  Mr. Jones is currently President of the Pennsylvania Coalition of Public Charter Schools and is the founding Chief Executive Officer of the Richard Allen Preparatory Charter School, Inc., a position he still holds.

Mr. Khatri is a Certified Public Accountant and is President of Khatri and company. He previously worked as a senior business specialist to the African American Delaware Valley Port Corporation, and various Accounting firms. He is a graduate of Drexel University and has professional affiliations with the Council of Indian Organizations in Greater Philadelphia and the Asian Indian Chamber of Commerce in Delaware Valley.

Dr. Mitchell is president and CEO of Management and environmental technologies. She has extensive experience in administration of public and private sector goods and services. A graduate of Fordham University, she is the former Deputy Secretary of the PA Department of Commerce, and divides her time between Philadelphia and Pittsburgh where her company has a second office.

Ms. Mosley was educated in Human Resource Processes, training and development, Personnel Management and arbitration. She served as Director of Hickman Temple’s Day Care and learning center from 1975-1979 and assistant director from 1979 until her death. She was educated at Community College of Philadelphia and also served in Graduate Hospital and University of Pennsylvania’s nursing division.

Dr. Reverend Joseph D Patterson Sr. was appointed to the pastorate of Hickman Temple AME Church in 1979. He also served as a cabinet member in the Graduate Council of Cheyney University, his alma mater. A member of the Optimists club and Kappa Alpha Psi fraternity, Reverend Patterson is also the chair of the Baltimore Avenue Redevelopment Corporation. Dr. Patterson retired from the Chester Pennsylvania Board of Education where he served thirty-two years as a teacher, advisor and supervisor of Special education.

Dr. Smallwood, who along with Dr. Joseph Patterson conceived the idea of the Richard Allen Preparatory Charter School, received his BS degree from Cheyney University, Master of Public Policy, Rutgers University and his PhD in Business Administration from LaSalle University, Louisiana. Dr. Smallwood has served as a teacher for the School District of Philadelphia, Counselor at Temple University School of Social Administration, Instructor for Rutgers University School of Business Administration, President & CEO of Camden Economic Development Corporation and Camden Local Development Corporation and Executive Vice-President and Chief Operating Officer of Management & Environmental Technologies, Inc. Retired 2005,he is currently President & Chief Executive Officer of Baltimore Avenue Redevelopment Corporation and a Marathon Coach for the Leukemia and Lymphoma Society. He is married to Reba Smallwood. They have four children and six grandchildren.

Mrs. Jones has worked extensively in the field of children's mental health in the City of Philadelphia. She is a graduate of Spelman College with a degree in Political Science and has Master’s degrees from Lincoln University and Temple University. She is a founder of the Richard Allen Preparatory School and has been on the board since its inception in 2001. Married with two children, Mrs. Smallwood-Jones has been in the social services field for fifteen years.  Currently, she is the Clinical Manager for the Richard Allen Preparatory Charter School.

Ms. Suggs attended North Carolina A&T and Drexel University. She worked as a staff accountant assistant and served as Secretary of finance at Hickman Temple AME Church and Chairman for the Board of Youth Affairs.