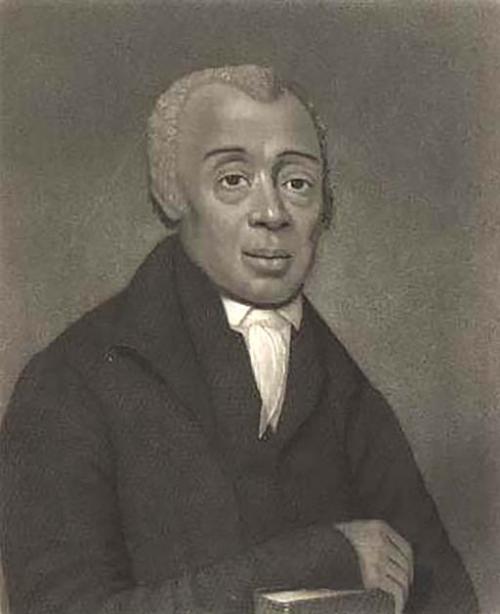 Richard Allen was born into slavery to Benjamin Chew of Philadelphia, on February 14, 1760. His mother, father, and their four children were sold to a plantation in Delaware, near Dover. He lived there until he was twenty. He was saved and accepted Christ at that time. He and his brother joined the Methodist Society and started going to classes with John Gray (their class leader) in the style of the Methodist Church. Their master allowed them to attend these meetings. Some of their neighbors were saying that religion would make slaves worse servants. Richard Allen and his brother worked hard to ensure that all the field work was completed to prove them wrong. His master also allowed them to hold meetings at their house, and he converted to Christianity, as well.  He felt it was wrong to own slaves, so he proposed to sell Richard Allen his freedom for $2,000 continental money. Richard bought his and his brother's freedom in 1783.

Richard Allen was a man of sublime courage and indestructible and passionate faith. Equipped with these two spiritual weapons he could not be beaten down. In 1787 when he and others of African descent were denied the freedom to worship God in the St. George Methodist Episcopal Church (now known as the United Methodist Church) in Philadelphia, Pennsylvania, he politely walked out. The movement which was begun as a result of the walk out blossomed into the African Methodist Episcopal (A.M.E.) Church.

Richard Allen felt that he had a special duty to spread the gospel among Africans and people of African descent as well as those of all ethnic, racial and cultural backgrounds. These were the people, who, because of segregation and discrimination in church and state, were being dehumanized, ostracized, exploited, robbed, by-passed and otherwise mistreated. With these high goals and noble purposes in mind, he proceeded to take the ugly social situation which made his movement necessary, and stir up in the African a burning determination to be first class Christians and first class Americans.

In 1793, Allen and Absalom Jones responded to Benjamin Rush's call to mobilize the black community to serve during Philadelphia's yellow fever epidemic. When reports circulated of blacks plundering and profiteering from the disease, the two ministers published A Narrative of the Proceedings of the Black People, During the Late Awful Calamity in Philadelphia in the Year 1793 and A Refutation of Some Censures Thrown upon them in some late Publications, a defense of the black community and a documentation of their heroic efforts.

Between 1815 and 1830 Richard Allen was often recognized as a leader of free Blacks in the north. In 1816 Richard Allen was consecrated the first bishop of this new denomination. In 1817 his Bethel A.M.E. Church hosted the first general mass meeting by Blacks to protest the deportation policies made by the American Colonization Society. After this was over he continued his career of preaching and organizing. He died in 1831.

Richard Allen's autobiography is available online!  Click here to read about Reverend Allen in his own words.